The UK general election is to be held on Thursday 7th May 2015. Each political party has chucked something at social media, some have invested more heavily than others. With the youngest chunk of the voting population notoriously absent at general elections, there is always a big old push to harness their votes. 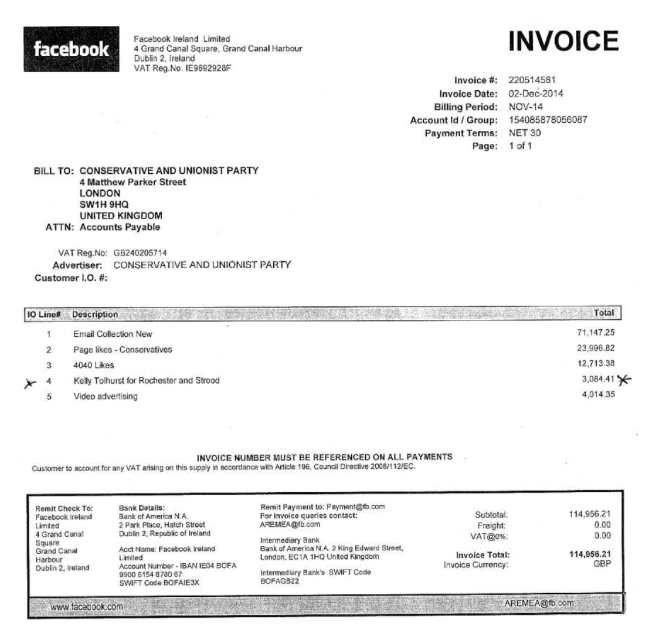 This article on the BBC news website from February is rather shocking in its claims of budgets – it says the Tories were charged about a NZD 220,000 by Facebook in November last year. The alleged invoice appeared on this political website in January this year.

The invoice looks kind of dodgy too. Maybe Ed Miliband’s son knocked it up at school to help his father get ahead in the polls.

UKIP apparently only spent around NZD300 per month, yet they have the most enthusiastic presence across social media with around 455,000 likes. Granted, they probably engender plenty more debate around their views on immigration amongst the youngsters most prevalent across social media but there is clearly quite some disparity between the amount invested and the engagement earned. At the Conservatives’ spending rate of over NZD220,000 per month, their 468,000 looks rather paltry in comparison.

Despite all this investment, there are some pretty big question marks over the validity of serious campaigning over social media. There is so much trolling, pranking, leg-pulling and sarcasm across Twitter and Facebook. There may only be one genuine Twitter handle for each party but there are countless spoof ones which collectively shout much louder than Cameron, Clegg, Farage, Miliband and their flunkies.

Russell Brand seems to have pulled a bit of a u-turn though – having encouraged a no-voting tactic for the last couple of years he has pulled in 1.2 million views to his YouTube video, chatting to Labour leader Ed Miliband and telling people he thinks Ed will listen to the people, and make the change necessary.