Social media is brilliant.  I am a Brit living in New Zealand.  Because of social media and other forms of communication which use bandwidth instead of traditional, infinitely more expensive telecom lines, my parents in the UK know my children really well.  Unlike their teacher who sees them daily, they can tell the difference between my identical twin daughters, just from using Skype, Face Time and seeing lots of photos over the last 5 years, all of which have been absolutely free. 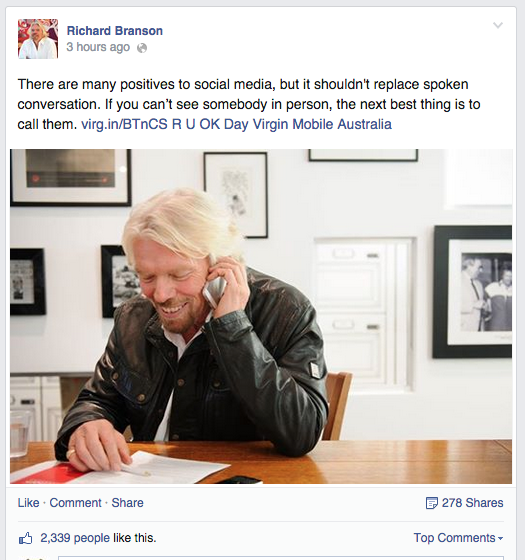 I can converse with my best friend at home on a daily basis through Whatsapp – last night I woke up at 3am to see a photo of a pair of boots she wanted my opinion on (get them Nancy, obvs).  Because of social media we talk to each other as if we are in the same room and there has been no break in conversation.  ‘Can you text me the recipe for that salmon dish we had for lunch with your parents last year?’

Some time ago we wrote an article on Scoop which discussed the opportunities for using information from studies on social media to help research into the unusually high youth suicide rates in New Zealand (the article was then picked up by World TV, who were researching the topic).

Any opportunity to use huge swathes of data available to companies like Facebook to help understand murky and devastating illnesses such as depression is clearly a good thing. However, reading little snippets like this gets me irritated.

Sure, encourage people to talk to each other and step over the line when you are worried abut the mental health of a colleague or friend.  Yes, let’s bring it more to the fore to get rid of the barbed wire surrounding depression and suicide as conversation topics, but don’t imply that communicating through social media isn’t important.  No one needs to be told that social media can’t replace the art of spoken conversation.  That’s ridiculous.

Throwing out stats like ‘57% of Aussies call their friends and family less frequently since the rise of social media’ is disingenuous.  Do they call them less on traditional telecommunication lines?  Perhaps they use Skype more.  Maybe they chat daily on Messenger.  Maybe they send weekly lengthy emails.  Which year is taken as the rise of social media? Maybe because of the reduced cost of communicating across the internet, people call each other less frequently and spend longer chatting.  All these questions poke holes in that statistic.

Encouraging communication is a great thing.  However there is no one size fits all.  Asking someone if they are ok through Facebook may be the first step to leading them to chat face to face.  If you’d just called out of the blue they may not have answered.   In the past when I have gone through patches of really struggling, someone asking if I’m ok would have blown my top.  It would have sounded condescending.

Horses for courses.  Thank God for the rise of social media.  The introduction of a huge range of options for communication is amazing.  Never before have we had such opportunity.  Let’s capitalise on it, not dis it.

Previous post Look around you. Are you sitting in the right place?
Next post Marketing Summit 2014
Let’s Talk