Some people say that we talk smack here at Mosh, but we don’t realise that until an outsider comes in and to say, “what does that even mean?”. That’s when we turn to each other, gently remind ourselves that we’re social media nerds and say, “stop talking smack”. 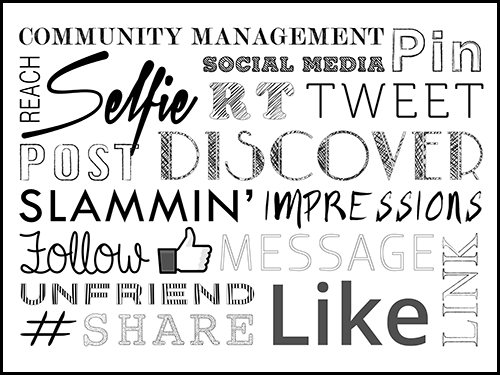 To redeem ourselves, here’s a glossary covering the most important social media terminology of 2015 for you to bookmark.

Algorithm: In social media, an algorithm is the rules-based process that determines what content we see. Facebook’s Newsfeed doesn’t show every status update and every photo in chronological order. Instead, its algorithm (some say his name is EdgeRank) curates content that Facebook thinks you would most like to see. Like the algorithms that power search engines, social media algorithms have a big say in how visible your brand is; favouring those that are engaging. We the other 95% of brands, well they need to pay (via advertising) to get their content seen.

Block: A feature on social media platforms – Twitter, Instagram and Snapchat – that lets you to stop specific people following you (on Facebook it’s called “Unfriend”). Blocking is useful for bullies, ex-boyfriends and anyone annoying that you associate with on social media.

CTA (Call to action): An instruction to your audience that provokes a response, usually using imperative terms such as “Shop Now”, “Find Out Now” or “Watch More”.

CTR (Click through rate): A metric used for reporting on the number of people who viewed a message (a post or an ad) and then actually did what you wanted them to do, such as clicking on a link or an ad. It’s calculated by comparing the number of clicks to impressions. Say, for example, your ad was seen 100 times on Facebook and one person clicked on the ad, you would have a click-through-rate of 1%.

CPC (Cost per click): The amount you’re charged each time someone clicks on your ad. Your total charges are based on the amount you spent on the ad divided by the number of clicks the ad received.

CPM (Cost Per 1000 impressions): The most common method for pricing web ads. An advertisement’s success cannot be measured by CTR alone, because an ad that is viewed but not clicked on may still have an impact.

Community Management: Interacting, monitoring and engaging with your online followers. The goal is to nurture relationships so that the community acts as advocates on behalf of your brand.

Conversions: A positive action that is taken on a website by a visitor from social media. It demonstrates that the visitor is “converting” into a customer. Tracking conversions is really, really important for properly attributing revenue to social media.

Content Curation: This is the process of searching the internet for content and presenting it to the world on social media in a meaningful way. Unlike content marketing, content curation doesn’t involve publishing new content. Instead, it’s about creating value for your audience by saving them time and effort.

Creep: The practice of spending an unhealthy amount of time looking through someone’s profile, photos, and videos on social media. One might creep on an ex-girlfriend/boyfriends new partner or a crush you’ve never met but would really like to. At least, that’s what people tell us. We don’t do that.

Custom Audiences: Custom audiences let you reach customers you already know with ads on Facebook and Twitter. You can upload a list of email addresses or phone numbers or record people who visit your website and create a target-able audience out of them – fun huh.

Discover: A feature on the Twitter platform that has five functions: Tweets, Activity, Who to Follow, Find Friends and Popular accounts.

Engagement Rate: The percentage of people who saw a post that liked, shared, clicked or commented on it. You’ll find your engagement rate in your Facebook Insights tab.

Embedded Media: Media from an outside source displayed on social media.

Geolocation/ Geotagging: Tagging a social media post with a specific location, made possible thanks to the very clever smartphone.

Geotargeting: A feature on social media platforms that allows you to share content with geographically-defined audiences. Instead of sending a generic message for the whole world to see, you can refine the messaging for specific countries, regions or cities.

Hypertargeting: Delivering ads to specific interest-based segments within a network. The term belongs to MySpace, which defines it as “enabling online marketers to tap into self-expressed user information to target campaigns like never before”.

Impressions: The number of times a post from your page is displayed, whether it’s to the same person or not i.e. people may see multiple impressions of the same post. Impressions measure your ability to expose people to your content and can help you understand not just how many users you’re reaching, but how frequently those users are seeing your posts, or content associated with your page.

Influencer: A social media celeb or personality who can drive awareness about a trend, topic, company, or product.

Lookalike Audiences: Lookalike audiences let you reach new people who are likely to be interested in your business because they’re similar in profile to the customers you already care about.

Mentions: What users are saying about you on social media. You might like to track mentions of your brand name, your industry, your competitors’ brands, or associated keywords.

Reach: The number of individual people your content has, well, reached. A bit like unique impressions. For example, Facebook defines reach as “the number of people who saw your post” and considers a post to reach someone if it appears in that person’s newsfeed.

Remarketing: Remarketing lets you show ads to people who have visited your website before. When people leave your website without buying anything, for example, remarketing helps you reconnect with them by showing relevant ads as they browse the web, as they use mobile apps, or as they search on Google. Use with care.

Selfie: A photograph that one has taken of oneself, typically one taken with a smartphone from an high angle on your best side to best accentuate your facial features. If you need selfie training, a few of the Mosh team are experts in the area.

Sentiment Analysis: Sentiment analysis is basically looking into the emotion behind a social media mention. Sentiment adds context to social conversations. Without it, measuring mentions could be misleading.

UGC (User Generated Content): Media that has been created and published online by social media users. Marketers have embraced and encouraged user generated content as a means of increasing brand awareness and customer loyalty.